Bloody summer, I HATE IT!
Summer in the Northern Hemisphere is like winter here in Oz – well that’s a slight exaggeration, it may be a tad warmer but compared to here it’s nothing. It’s now back to air conditioners, cold showers and that’s at night GRRRRR.

Plus it slows stuff down i.e. me doin work on the Bonneville, it gets so bleeding ‘ot in the shed ya gotta wander outside to get a bitta fresh air and wipe the sweat off. Just on the Bonneville, it’s got an annoying rattle in the top end that I just gotta find and fix. Pulled the front cam out to double check the anti-backlash gear, reset that now I’m changing all the stupid torx screws for allen head bolts in the cam blocks – damn stupid idea are them torx screws.

The only other things I need to do are fit the Lucas tail light, the short Lucas blinkers and the Ped Slicer 😉

A young lad said to his father one day, “dad everyone say’s their bike is the best etc, but yours is the only one in the bible.”
His father replied. “How so mate?”
He said “it says in the bible that David’s Triumph could be heard through out the land.”

Sold the Sporty – I’m not a Harley person to be honest and with that said it went 😛 I’ve now got myself a 2001 Triumph Bonneville in Forest Green and Silver, and am totally stoked!!

Granted it’s got 66,000 on the clock (Klm’s not Miles) but to look at it it looks like it just rolled off the showroom floor. Not only are the Bonnies a great looking bike they also handle so this one is a def keeper for sure. 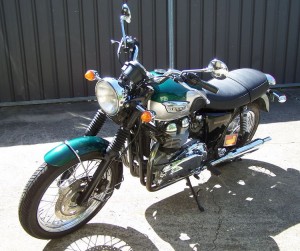 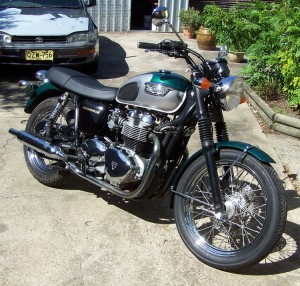