Yes, four 😉 Seeing as I had a stack of marine ply I cut it all to CBG size so now I’ve got masses of tops, bottoms, ends and sides, with that said I started on one, then another and another to the point where I ended up with five body’s ready to go. Discarded one as the more I looked at it the more I disliked it and have ended up with the four as shown in the pic.

Maybe I’ll stop painting the bike one day NOT!!
This version is Protec base black under SFX Blue Pearl in Protec Top Coat Clear. Next comes the flamenco dancer on the top of the tank and the word ‘Gitana’ on the sides – I’ve just got to decide what she’ll look like, which may well take me forever :P. You can also see the 4″ forward control extensions that make the ride sooooo much more comfy.

Either way, the airbrushing will be done with my trusty Iwata HP-C Plus with Iwata Medea Com-Art and Createx paints. 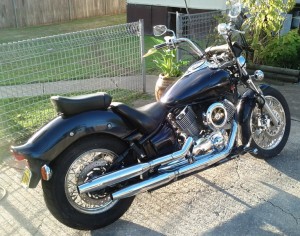 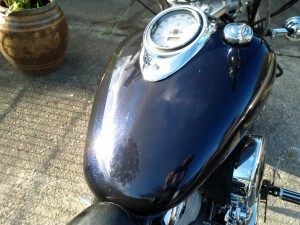 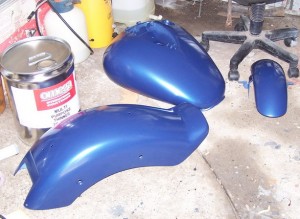 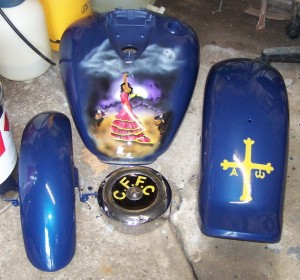 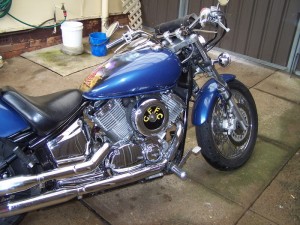 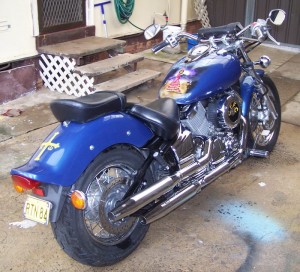 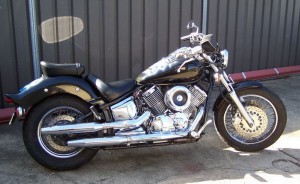 Just thought I’d post a few pics of the Vulcan in its current state – I’m waiting on one lousy gasket and I can re-install the motor grrrrrrr.

Measured up the crossover pipe for the exhaust for the Vulcan and they always say measure twice – cut once, I measured twice and still balls’ed it up 🙂 some how I ended up with a crossover pipe that was 4″ too long so I pick up the fixed one, all welded n stuff tomorrow, I’ll get thet fitted along with the Harley tapered turbo’s and thats the exhaust system finished.

All it needs then will be one number plate bulb, two fuel lines and a two vacuum hoses and it’s sweet 😉

END_OF_DOCUMENT_TOKEN_TO_BE_REPLACED

Well this is the second last post on this little epic. It’s painted, buffed, wheels painted yada yada – just gotta get the exhaust’s level fit the exhaust covers, fit the painted panel set, oh and sit back n wait for the grips I ordered but apart from that oh and polish it it’s done.

Pain, Pain and MORE Pain!!! My back is killing me, as is my shoulder – bloody old age so all I managed to get sorted today was covering the bits in stop putty and making up a missing bracket.