Finally – well apart from strap buttons got the Strat back together and with the HH set up it sounds wayyyyyy smooth,

I think I lucked in with the pups as I was half expecting a grungy sorta sound but the sound it’s got is so much better.
Y’all are probably still wondering why the f**k I bothered spending so much time on a Squier, well all I can say is why not – there’s nothing wrong with them and with some minor tweeking they can be made to play and sound bloody great.

So I thought I’d fit up all the electrics – ended going for a white scratch plate instead of grey. Why? I hear you ask (not) well I couldn’t get a grey one – pretty simple really 😉 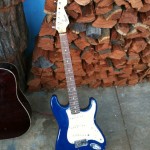