S’gettin There – but Where Oh Where Is ONE GASKET!!!!!

Just thought I’d post a few pics of the Vulcan in its current state – I’m waiting on one lousy gasket and I can re-install the motor grrrrrrr.

Tore the motor out, pain in the arse just to do a stator but it also gives me the chance to rebuild and re-jet the carbs, polish the rocker boxes, degrease the whole thing, paint the frame and service bits that need servicing e.g. the drive shaft etc – shrug it’s all fun NOT!! 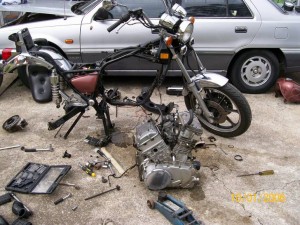 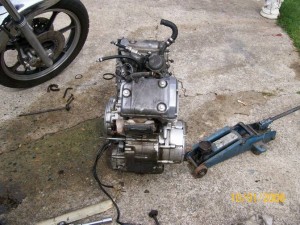 The bike was running like a clock, even the thermo kicked in which was something that concerned me seeing as I was yet to see it goin – anyhoo, locked it up for the night, went out the following morning to do some more alloy polishing, pushed the starter and nuffin 🙁

The spark is as weak as water, so after some testin’ my biggest concern was realised – the stator had gone tit’s up *groan* oh well – replacing it can only be a good thing. I’m also going to replace the Regulator/Rectifier, rebuild and re-jet the carbs, scrap the ears and put K&N’s on and respray the frame while the motors out – might even re-paint the tank and side covers, I’ll see how I feel after the engine’s rebuilt.

My Bad – But Hey We All Make Mistakes

Measured up the crossover pipe for the exhaust for the Vulcan and they always say measure twice – cut once, I measured twice and still balls’ed it up 🙂 some how I ended up with a crossover pipe that was 4″ too long so I pick up the fixed one, all welded n stuff tomorrow, I’ll get thet fitted along with the Harley tapered turbo’s and thats the exhaust system finished.

All it needs then will be one number plate bulb, two fuel lines and a two vacuum hoses and it’s sweet 😉

Photos and more of the Vulcan

END_OF_DOCUMENT_TOKEN_TO_BE_REPLACED

It didn’t take me long, but I’ve torn the VN down ready for a respray and full service. Starting on the service bits, I’ve had to order a new Oil Screen as the original was all but non-existent, 2 new Air Filters as they were in the same state, a Water Temp Sensor as the original was broken, along with associated oils, filters, plugs, etc.

While I’m waiting for them to come in, I’ve found an exhaust shop that will make the necessary mods to the left hand (rear) head pipe to shoot it across and under the bike so it exits on the right hand side and MCAS have in stock baffled slash cuts that are supposed to be replacement slip-ons for a Harleys and the like but they’ll do. I did get quoted $1,300 for a complete custom system, doing it this way will see the grand total for the system coming in at $160 to $180 INCLUDING the mufflers which are 60 bux each.

So as for the tins? Well the plastic 😉 side covers have been sanded down, and the tank has been stripped to bare metal which has revealed two minor repairs not the one that I thought so they’ve been pulled out a bit and bogged or bondo’ed or whatever ya wanna call it up and it’s now sitting in the shed in the cold waiting ’til tomorrow when I hope we’ll see a touch of sunshine and I’ll then attack it with etch primer, undercoat, spray putty, block it as flat as glass another coat of undercoat and she’ll be ready to paint. The colour? Well it’s a deep copper bronze I’m putting old school flames up the side in transparent brown over yellow, then I’m going to cover the lot in red pearl. After that’s all dried it’ll get blocked down with 1200 and I’m going to air brush the club centre patch (cross and three nails) on the top of the tank, clear it all, and leave it all for a good few days to rock hard, block with soap n superfine then buff it mwooohahahahaha what fun.

Yet another new toy? Will the boy ever stop LOL

Well the Honda sold, and with that I had some spare readies to buy summut else to play with, and below is it. A 1986 VN750A Kawasaki or Kumansukmeoff as Steven is apt to call ’em, bought for the princely sum of 2 grand.

What’s it need? Sod all really, just a general tidy up and bloody decent exhaust system. It’s got brand new tyres, a new battery (which gives me a spare) but the exhaust is woeful so I’m looking for a a set of Mac slashcuts that both come out on the same side – it’ll give it a nice note and a better appearance, so watch this space for paint and tidy up shots, oh and I’ve been told to not sell this one or I’ll get fumped 😉 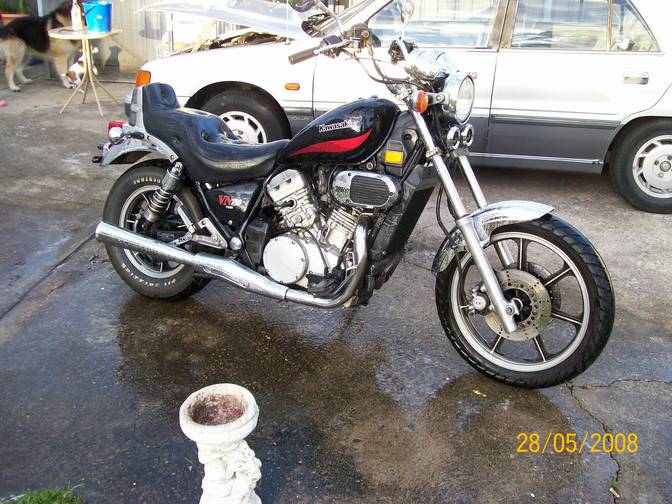