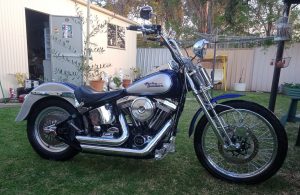 Getting there slowly, although everything has come to a grinding halt at the moment while the new workshop is being built. 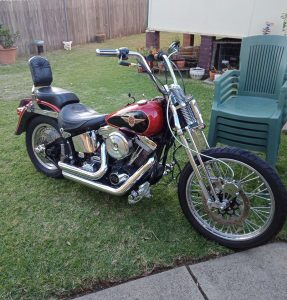 After finally letting the XVS1100 go (what a sad day that was) I spent some time looking for something else and almost bought a 1996 Triumph Thunderbird for $4,000 – ALMOST 🙂 Mark (son-in-law) pointed me at a candy apple red 1988 XLH1200 for $5,000 but he was confident that he could get it for less and he did – he paid a pittance for it you could almost say he stole it LOL well the dude at MCAS said for the $3,700 he paid for it was like stealing it hehe.

It’s got a wide glide kit with 4″ ups that I’m pulling off and returning to stock, a fatbob tank, an S&S Shorty and was rebuilt a while back, the owner rode it till it ran out of rego then just parked it – bargain for me 😛

As you can plainly see, from foto three onwards is how it finally looks apart from the 2″ Ultima Drag Pipes 😛

All up it owes me $4,550, it goes like stink, stops on a two bob bit and sounds like a freight train but maybe that’s coz of the Dyna mufflers ;). Now that’s a cheap conversion for anyone with one of these – 50 bux for a pair of mufflers, 20 bux for head pipe sleeves and a couple of hours of mucking about to get things perfect – just remember to really tighten up the rear head pipe nice and tight. What I thought was tight wasn’t and when you rode it, it backfired when you changed gear which apart from scaring the crap outta me didn’t do anyone standing on the side of the road any favours either LOL – you can hear it in the video.

Anyhoo – here’s the piccy and a video.